In the early 1950's the fishing industry was revolutionized by the introduction of synthetic fibers into the net manufacturing process. Nylon was the first to be widely used in the manufacture of fishing nets, but several other fibers have since become quite important.

For thousands of years, before the introduction of synthetics, fishing nets were made of natural fibers, mainly cotton, linen, flax and sisal. These fibers presented the fishermen with many problems; they rotted easily, absorbed much water during use, and demanded constant attention. Caring for his nets took so much of the fisherman's time that there was relatively little left for the actual business of fishing.

With the introduction of synthetic fibers, all this changed. Nets made of synthetics do not absorb water, do not rot, and are stronger, lighter and easier to handle than those made of natural fibers. The savings to the fisherman in time, energy and money have been tremendous. Efficiency has improved, and catches have increased to the point where fishing is now one of the world's most important industries.

Raw materials popularly used for fishing twines and nets can be classified as follows:

Nowadays the great majority of fishing nets are made of synthetic fibers.

Before examining synthetic raw materials, we must explain the term "denier", which is used to specify continuous filament synthetic fibers.

Before discussing Vinylon, which is a "cut" fiber, we must explain the term "count".

All twines and nets are made of either synthetic materials (Nylon, Polyester, Polyethylene, Polypropylene, etc.) or of natural materials (Cotton, Linen, Flax, Manila, etc.). These raw materials fall into two categories:

Just as "denier" is used to specify the thickness of a synthetic multifilament yarn, "count" is the term used to specify the thickness of a yarn spun from cut fiber (whether synthetic or natural). The "count" number (abbreviated "c") of any cut fiber tells us the relationship between its weight and its length. It has been decided, by international agreement, that the following formula shall indicate the standard of one count:

The most popular sizes of cut fiber used in fishing nets are:

Though other considerations such as fiber strength, flexibility and durability are usually most important, the specific gravities of synthetic fibers should also be considered when choosing a fiber for twines or nets.

Below are the specific gravities of the synthetic fibers most commonly used in twines and fishing nets, plus those of certain relatively important natural fibers.

There are two types of nylon used for fishing nets:

Both types are readily available all over the world.

Nylon Multifilament is composed of very fine filaments. The sizes of nylon multifilament yarns most commonly used in fishing nets and twines are:-

Of these, 210d is, by far, the most commonly used and important. 210d yarn is usually composed of 24 filaments.

Nylon Monofilament lines are produced in a way very similar in principle, to that by which Nylon Multifilament yarns are produced. The technique is called extrusion. There is a great difference, in the relative scale of each operation. Where the production of multifilament requires a very large-scale operation and tremendous space and facilities, monofilament can easily be produced by a relatively small- scale operation.

Polyethylene, like Nylon Monofilament, is produced through a small scale extrusion process. Although it is a monofilament, it is specified according to denier. This is because one Polyethylene line is, by itself, relatively weak. It is therefore never used for fishing in this form. Instead, Polyethylene lines are always twisted or braided.

Polyester is similar to Nylon Multifilament in appearance. And it is used, almost always, in multifilament form.

Vinylon, a fiber invented in Japan, is currently only manufactured in Japan and The People's Republic of China. It is a cut fiber and is similar to cotton in appearance.

In order to manufacture finished netting, the basics raw material must first be transformed into a workable form, that is, "twine".

Twines are formed by twisting yarns or filaments on a "Ring Doubling Machine" (Ring Twister) in two stages:

Twines may be twisted in one of two directions "Left" (L) or "Right" (R).
Traditionally, twines used for the manufacture of fishing nets receive a "Left" (L) twist.

Finished lengths of twine are specified as follows: 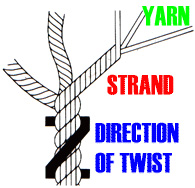 In this case, the production process on the Ring Twister would be as follows:

With the following eight specifications, any piece of netting can be completely described:

There are two common types of knot used to knit netting;

The single knot is used in all other types of netting.
Purse and beach seine, trawl and stationary.

There are two ways of specifying mesh size:

Measured in number of meshes

Netting may be dyed to any color.